Reframing Gender: Masculinity and Femininity as a Personality Construct and the Gender Cup Model

In the In the years since I began writing and gender, sex, and relationships, my hypothesis on the true nature of gender has evolved. Originally, I explained "gender" as a spectrum with masculinity at one end and femininity at the other. Any given person, regardless of their biological (do they have a penis and testes, a vagina and ovaries, or any of the variations and combinations that can occur) or genetic sex (XX, XY, or any other variation that can occur), fell somewhere on the spectrum. It looks something like this:

I had liked this idea because it allowed for the wide variety of gender expression we see occurring throughout our populations. The problem, though, is the construct didn't allow for the combinations of masculinity and femininity we see.

For example, it would be entirely possible for a biological and genetic male to exhibit very strong masculine traits, yet also exhibit very strong feminine traits situationally. Based off my hypothesis I explained in this post on my other man camp blog, this kind of man would commonly be called a "gentleman" and would be considered exceptionally high value to potential mates. In the realm of gender research, this man who displays both masculine and feminine traits would be considered "androgynous."

This man, however, can't really be described with the "spectrum" model above. If he's placed somewhere in the middle, we couldn't discern him from an "undifferentiated" person who exhibits few masculine OR feminine traits, which according to the hypothesis, would be low value to potential mates.

So I needed a new representation of my model, and this new model had to account for a few... issues. Including:

Taking these into consideration, I developed a better model. Note this isn't actually MY original idea; the inclusion of masculine and feminine gender traits have been studied by personality psychologists for over a hundred years. My model is unique in that it's tailored to be used as a foundation for the rest of the ideas and concepts that make up the "man camp" world view. 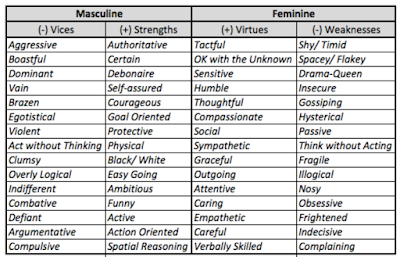 Gender as a Personality Construct

Your particular measure of masculinity and femininity will be represented with two cups: 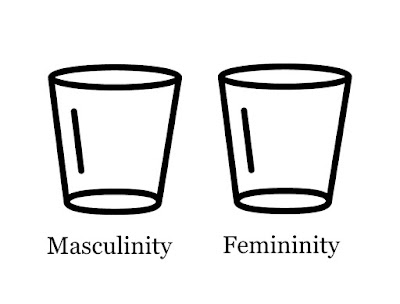 As the measure of masculinity and femininity increases, the cups get progressively more full. Each of us will have a particular level in each cup that represents our distribution of masculine and feminine traits. 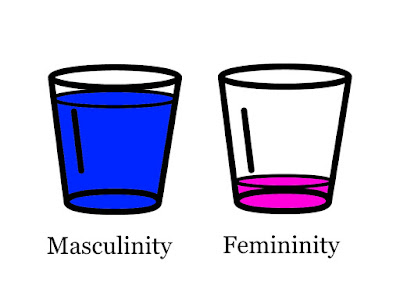 As you can see, I skew HEAVILY towards the masculine. Interestingly, back in my "Nice Guy" days, I would have scored FAR higher on the femininity cup and FAR lower on the masculinity cup. Not because I was a fundamentally different person, but rather because I thought that "Nice Guy" persona would get me what I desperately wanted - female attention. The cups above represent my authentic self. I'm pretty good at the feminine traits represented in the cups above because they're fundamentally part of who I am. But the feminine traits that I "faked" as part of my "Nice Guy" persona? Not so much.

I'd expect the majority of the population to follow this particular pattern. HOWEVER, it's entirely possible for other combinations to exist. A biological and genetic male could express feminine characteristics as his primary gender. And vice versa. Or a genetic or biological male or female could have equal parts masculinity and femininity. AND those characteristics could be balanced in such a way that they're equally dominant (both "primary".) And so on.

The way to think of "gender", therefore, is that it exists independently of biological sex, genetic sex, sexual orientation, or any other such construct.

The model itself isn't new or revolutionary; it merely gives us a useful framework to talk about the role of gender on how we perceive ourselves and the world around us, and helps explain, predict, and alter how we relate to other people. Especially in relationships.

How We Can Use This Model

These are just a few of the practical applications of the Gender Cup Model. Moving forward, this'll likely be the model I use for future posts.