I don't normally write when emotional; it clouds my reasoning. Today's going to be an exception.

Fair warning - there is no happy ending. I'm writing this one just for me; this is my therapy today. 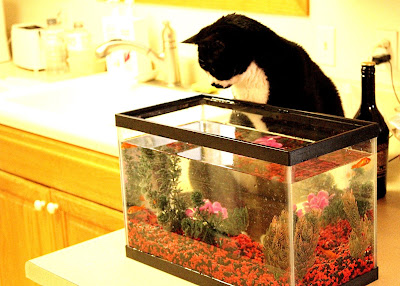 This is Floki, one of our rescue cats we've had for about five years. Here, he's sitting on his favorite spot - our kitchen counter. God, that annoyed me.

When we got Floki as a kitten, he seemed kinda weird. Eccentric, almost. For fans of Vikings, you'll recognize his namesake.


As Floki grew, we came to realize he wasn't eccentric so much as... slow. What Floki lacked in intelligence he more than made up in sweetness. And freakishly-fast reflexes, even for a cat. Over those five years in California and later Colorado, We never had a mouse or fly that lived more than a few hours.

Floki had a lot of peculiar behaviors. He never really got the hang of litter boxes. Most of the time he hit the mark, but once or twice per week, he'd only come close. It was a pain in the ass. But it was Floki. It was impossible to stay mad at him for more than a few seconds, especially when he'd look up at you with his giant googly eyes.


He was weirdly bad at grooming, so it wasn't uncommon for him to have patches of matted fur or white cat dandruff splattered across his shiny black fur.

If Shelly and I were lying on the couch watching TV, Floki would hop up on us, walk around to find the most awkward spot so half of his body would cover both of us, then plop down. At the slightest movement, he'd leap up and scatter away.

Other times he'd hop up on your lap and, in another lesson Floki never learned, he'd make biscuits without retracting his nails. And it hurt like Hell. But it was Floki. He'd settle in and let you stroke his ears. He had a strange, barely-audible purr that would stir as he melted into your lap.

I'm not much of a cat person, but I loved that cat. Maybe it was because he was completely devoid of that asshole-ishness most cats possess. Maybe I felt a little sorry for him. Maybe his demeanor just reminded me of a dog. Damn, I really loved Floki.

Over the last few weeks, Floki started losing weight. He started begging for any kind of meat we might be eating. He started drinking A LOT of water. He started wanting to cuddle more. And he started peeing in random spots around the house.

We made a vet appointment, and this last Friday, I had to go through the routine of coaxing him in a crate. Floki absolutely hated that crate and would fight tooth and nail to stay out. Literally. He was soooo damn strong. From the moment I'd get him in the crate to the moment he was let out, he'd let out a deep, heart-breaking howl. He was always petrified and would be traumatized afterward. It was never easy.

As it turns out, Floki was sick. Very, very sick. After consulting with the vet, Shelly and I had three terrible options. We could do nothing and Floki would likely die within a month, but it would be a decidedly unpleasant decline ending in a painful death.

We could try treatment, but it would involve a lot of injections, indefinite, weekly trips to the vet indefinitely for testing, and a cost that was several multitudes of what we could afford given the realities of the present situation gripping our world.

Finally, we could euthanize him.

After a horrible, painful discussion, we made our decision. The first option was simply too inhumane and would require way too much suffering. The second option would require money we didn't have, but more significantly, would require crating him for a trip to the vet every week for as long as he could fight. I couldn't do that to him. So we chose the last one.

Now, I have a little bit of a peculiar belief about euthanization. In some confluence of the influence of my dad, the movies Old Yeller and Of Mice and Men, a belief in the responsibility of pet ownership, and finally a deep drive to be kind to the weak, I don't believe euthanasia should be done by a stranger. Part of the responsibility of owning a pet is being willing and able to end your pet's suffering yourself instead of farming it out to a third party. It's just part of being a man.

It's probably not a popular belief, but it's my belief.

Having grown up as a hunter and being surrounded by farmers, I don't have an issue with killing animals, but a beloved pet is different. And given Floki's... specialness... it's really fucking painful.

The absolute last thing I wanted for Floki at the end was to go back into that crate, drive to the vet while howling the whole time in terror, be placed on an unfamiliar table in an unfamiliar room and be given a painful injection by an unfamiliar person.

So Shelly and I made a plan. We would tell our three kids Friday night to give them time to spend with him that night and Saturday, then wake up early Sunday and do what I had to do.

For the last 36 hours of his like, Floki lived like a king. We showered him with attention. Fed him countless cat treats he loved, and did anything and everything else he loved.

When I woke up this morning, the dread had really set in. Given I don't have a ready supply of phenobarbital, there's really only one way to humanely euthanize a cat. One bullet in the middle of the forehead. It's close and it's personal and it's traumatic. But it's humane. I couldn't stop rehearsing the steps in my head, both because I hoped it might make it a little easier and because I didn't want to fuck up.

As I was milling about with the last-minute preparations, Floki took his regular spot on our kitchen counter top. Shelly fed him a cat sedative we had left over from our car ride from California to Colorado, and we showered him with some more attention and treats. The next hour and  a half crawled by.

When the sedative started taking effect, Shelly said her final goodbye and I loaded him in the car. I wanted to avoid the trauma of the crate, I let him lie on a cat bed in the passenger seat. As we drove out to the secluded area I had scouted the day before, I stroked his ears. I could feel that familiar, quiet purring. I'd like to say I held it together on that drive. But I can't.

Somewhat surprisingly, the moment we arrived, a calm fell over me. I now had a job to do and couldn't fuck it up. Compartmentalization, I suppose. It's a gift and a curse.

By now, the early morning sun was warming the air and ground. Some birds were singing in a nearby tree. It was beautifully serene.

I quickly set everything up, then carried Floki to the spot. At this point, his eyes were mostly closed as the sedative had taken full effect. I set the cat bed on the ground, then laid him down. I laid down next to him and pet him for a bit. I quietly told him stories of my fondest memories with him over the years.

I was still surprisingly calm. The only emotion I felt was the warm connection I had with this cat I had grown so attached to over the last five years. He was purring as he drifted off to sleep. I was thankful those giant googly eyes were closed.

It was the first echo of the CRACK! off the walls of the valley that busted me out of that compartmentalization. I absolutely fucking lost it. I don't know how much time passed, but something snapped me back into that compartment. I still had a job to do; I had to finish this.

I wrapped him in one of the blankets he loved and loaded him in the car for the short drive to the spot I'd bury him. Fortuitously, Western Colorado is covered with mesas.


The drive sucked. God it sucked. I couldn't stop replaying it. I felt grief and sadness and anxiety. I wanted nothing more than to stop; to be doing anything other than what I was doing right then. But I had to finish.

I arrived at the spot. I climbed to the top of one of my favorites and found a perfect spot facing the snow-covered San Juan Mountains to the south. I'm not religious or even spiritual, but something about this spot felt right. Very, very right. The picture doesn't do it justice.

This was and still is really, really hard. But together, we gave Floki the best end he could have possibly had. He was treated like a king and had a peaceful end.

The grief will pass. It always does. But god damn, it hurts.