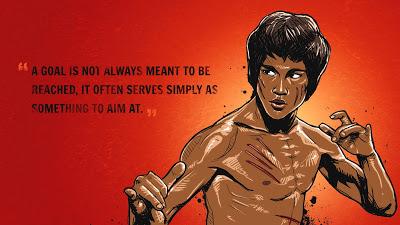 Goal-setting is a time-honored pillar of self-improvement. Most recommend setting difficult-but-achievable goals, reach the goal, then set another similarly-difficult goal. This is an excellent way to systematically progress and is exactly what I use regularly.


However, I also utilize close-to-if-not-completely-impossible goals like Bruce references in the above pic. I usually use this method for very specific situations, like my hobbies. Here are two examples:


Example #1: Back when I was running ultramarathons, I would pick one particular runner who was enjoying a high level of success. The goal was simple - I wanted to beat them. If we're running the same race, I wanted to finish ahead of them. If we were running the same race but different years, I'd want to beat their time. I would study everything about them... how they train, what they eat, what gear they use, how they prepared for races... whatever. Since there would be inevitable differences between us, I would alter whatever they did to account for said differences. They were far more successful than I was, so I would use them as the model. And they would be the rabbit I would chase. It was incredibly motivating.


I would also do this with specific elements of running. For example, I wanted to get better at running uphill. The solution? Pick someone who was a phenomenal uphill runner, then shoot to beat them.


The key- the people I would choose were really good. I only surpassed my targets about 10% of the time, but the net effect made me a FAR better runner. By the end of my ultrarunning days, I ended up finishing five 100 mile races (including a sub-24 hour finish at Western States), a 72-hour race, a six day stage race through the Rocky Mountains, and a bunch of 50 milers, 50k races, and marathons. All thanks to trying to beat those really good runners.


Example #2: Jiu jitsu. I spent the first two years of doing jiu jitsu learning as many of the basic, fundamental skills as I could without any specific targets. Once I felt I had a decent, well-rounded base, I wanted to start aiming for the stars. So I picked out the best jiu jitsu player I regularly trained with, and set the goal of being able to regularly beat them. So I do the same thing - closely study everything they do, then adapt it to myself then begin working hard.


Much more so than the ultrarunning goals, this one, in all likelihood, will be impossible. As a forty-plus year old dude, I'm already fighting the losing battle with age. The targets are significantly younger and more naturally athletic. However, jiu jitsu is a martial art specifically designed for a weaker, smaller, less athletic person to defeat a physically-superior opponent. That makes this goal theoretically possible, but it would require me to REALLY master every single technique and get creative with synthesizing new shit to give myself a competitive advantage. To make this goal even more difficult, the target excels at both technical proficiency and creative synthesis of the basics. There's an extremely high probability I will fail at this goal. But...

And, of course, setting that “impossible” goal has kept me in the sport long enough to have earned a brown belt and own my own jiu jitsu gym.


Example #3: Getting a book published. I’m NOT a talented writer. Hell, I always either took the easiest English and writing classes I could, or I found clever ways to test out of them. Despite this, I thought it would be cool to get a book published… which is a very difficult task. Apparently publishers only publish about 1% of all manuscripts they receive. In this example, instead of working my ass off, I found an effective work-around.


It turns out publishing is no different than any other business. Publishers publish books that will make them money. Once I figured that out, I planned a different route than typical writers take. I SELF-published my first book. I either did everything myself or hired local experts (for stuff like typesetting, printing, cover art, etc.) I made a website and sold books directly to customers, then eventually sold the books via Amazon and Barnes and Noble’s website. Thanks to my work in learning my audience and providing exactly what they wanted, I ended up selling quite a few copies of the first book, then almost as much of the second. Yes, that was shameless marketing.

Both were bringing in enough cash, I kinda forgot about the “get published” goal. Eventually I had publishers contacting me, which led to both books being published. [sidebar - if you’re an aspiring author, stick to self-publishing… it’s wayyyy more lucrative.]


The lesson: If there's something you really want to master or goal you want to accomplish, don't be afraid of picking impossible goals.


One of the explicit goals of our Man Camp men’s group is for the members to set goals, then relentlessly attack those goals until they’re achieved. The members hold each other accountable along with providing support and advice. A major aspect of being a man is continuous self-improvement, which turns out to be immensely fulfilling. Even more so when done in a tribe of like-minded men!


If you’re interested in setting some impossible goals and getting the support needed to accomplish them AND you live in the Western Slope area, check us out! Email me (Jason) at eldiablobjj “at” gmail.com.
Posted by Jason at 11:08 AM