Masculinity and Femininity Strengthens Our Relationships

Studying gender roles without the burden of expectation has been a fascinating journey. I've learned countless lessons I would have otherwise ignored based on my previously-held beliefs about the role of, well, gender roles. One of those weird lessons has to do with the apparent connection between traditional gender roles and relationship stability. The hypothesis is pretty simple:


The stability of a relationship increases as a function of traditional, complimentary gender role expression. 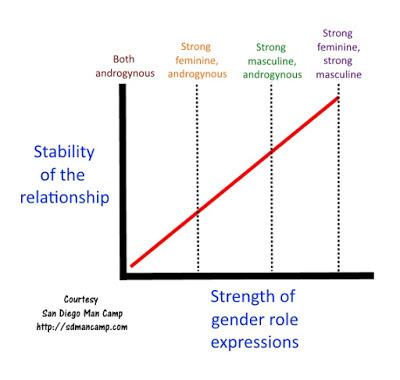 There are two gender roles - feminine and masculine. Each compliments the other. Like honey and mustard. Or yin and yang. Or Ren and Stimpy. The most stable relationships are those where one member expresses a strong masculine gender role and the other expresses a strong feminine gender role. Any deviation from that construct reduces the stability of the relationship ("stability" operationally defined as length of relationship + peacefulness + subjective fulfillment experienced by each partner.)

I hypothesize the sex of the person expressing the gender role isn't terribly important, at least to the individuals in the relationship (society may express other sentiments.) A genetic or biological female could probably fulfill the masculine role and a genetic or biological male could probably fulfill the feminine role and the idea would still apply. I have not had a large enough sample to confirm or refute that hypothesis, however.


Along the same lines, I hypothesize the same effect happens when both members of the couple are of the same genetic or biological sex. Again, I don't have an adequate sample size to conform or refute the hypothesis.

This topic, of course, is part of the rationale for the creation of the Man Camp. The realization that the masculine gender role plays as an important role in interpersonal relationships as it does to us as individuals contradicts what seems to be the prevailing social trend. Lots 'o people believe masculinity is maladaptive at best and toxic at worst. Those beliefs are then used to justify policies that violate the principle of gender equality (operationally defined as providing equal opportunity, equal possibility, and equal responsibility to anyone and everyone regardless of sex or gender.)


Gender roles are an interesting topic. For the purposes of this particular group and the specific "type" of man that would find it useful, the most relevant question would be:


In the realm of romantic interpersonal relationships, the empirical research isn't terribly helpful, so we have to fall back on anecdotal evidence. Based on the experiences of our early membership, the answer is unequivocally "MASCULINE IS BETTER!" The masculine personality type, for many men, leads to a more focused, productive, and most importantly, fulfilling life. Specific to relationships, the more masculine personality type appears to lead to more frequent and passionate sex, less conflict, less resentment, more consistent parenting, and more effective problem-solving.


That shouldn't be a surprise if we frame gender roles as complimentary instead of adversarial, or worse, oppressive. Masculinity and femininity are like two puzzle pieces with interlocking parts. <insert penis and vagina joke here>


Of course, your mileage may vary. Every claim I've made in this post is true... for some. I can't generalize these ideas to the wider population because my sample size is small and self-selective. As such, I'm not preaching this message to the world. I'm reaching to the choir. And the congregation. And those people that are curiously peeking through the keyhole of the church doors.
Posted by Jason at 9:11 AM