The Coronoavirus and the Great Toilet Paper Shortage of 2020 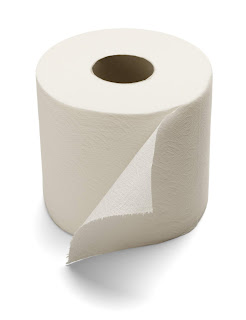 Us humans are weird. Today, I stopped by Walmart to get some croutons (I’m on a salad kick.) While wandering the store trying to remember where the salad fixins’ were located, I noticed the toilet paper aisle was completely empty. Over the last week or so, I’ve heard of several stories of people in high outbreak areas hoarding hand sanitizer, face masks, vitamin C, Lysol, and other virus ”fighting” stuff. Since people seem to be fearing widespread quarantines, bottled water and toilet paper has also been flying off the shelf.


I’m not one to panic about stuff, especially if there’s no evidence it’s going to impact my life in a meaningful way. And all those things above aren’t much more helpful than just washing your hands a lot and living a healthy lifestyle. So I haven’t bothered stocking up on anything. I normally make sure we have about three-to-six months of supplies on hand just as prudent preparation… except toilet paper. It’s bulky to store and our cats like to use unopened rolls as scratching posts. I figured I’d stock up on the TP if and when the coronavirus started spreading in Western Colorado, I’d stock up then. I did not anticipate people hoarding THIS early.


But I should have.


As a psychology teacher, I’m endlessly fascinated by human behavior. Especially weird human behavior. Objectively, the threat of the coronavirus to myself and my family is low. We’re all young, healthy, and have no history of respiratory illnesses or heart disease. And we’re all a bunch of introverts. We’re unlikely to contract the virus, and extremely unlikely to have complications. So I wasn’t losing sleep over it.


But a whole lotta people ARE losing sleep over it, and they’re manifesting their panic by purchasing tons of toilet paper.

So What’s Behind the Fear?

We’re typically terrible at perceiving risk. Especially THIS kind of risk. The coronavirus, despite objective evidence to the contrary, is perceived as a grave threat because it hits all five of the major antecedents for public hysteria, including:

One of the more common refrains I’ve heard from people are the recitation of stats of other dangers, like the measles, influenza, and even shark attacks. The problem with this as a means of alleviating fear is that we’re hard-wired to generate significantly more anxiety to NOVEL threats than known threats. The amygdala, a tiny part of our brain that registers fear, lights up when presented with a NEW threat. Why?


Evolutionarily-speaking, KNOWN threats aren’t as anxiety-producing because, based on the fact that we’ve faced them before, we know we can survive them. This is why skydiving is never as scary the second time. But NEW threats? We don’t know if that threat will kill us. And logic, reason, and statistics don’t alleviate emotional responses. So a whole lotta people freak out when people start testing positive for the coronavirus in their states.


Finally, the media coverage of pandemics ALWAYS heightens anxiety. We tend to get really butthurt over this, but our media is a for-profit enterprise. They make their money by getting eyeballs on their advertisements. We can’t blame them for being sensationalist; it’s literally their job. Besides, silence tends to generate even more anxiety than over-hyping. It’s truly a “damned if you do, damned if you don’t” phenomena.

So Why Toilet Paper?

The stuff people believe will fight the virus makes sense logically. It’s people’s attempts at improving #3 from the list above = they’re trying to protect themselves the best they can. But toilet paper? What sense does that make? This is a good lesson in the scarcity principle and supply and demand.


It’s all about the quarantine. In some places, notably China and Italy, entire cities, regions, or even the whole country are placed under mandatory quarantine. No leaving your house. That means people could have to stay indoors for days, a week, or even longer. As I discovered when living in cities, few people prepare for that possibility. They have enough provisions for a few days at the most. Including toilet paper.


So when the threat of a quarantine reaches a certain degree of “real possibility”, people start to panic and buy what they think they need. The food shelves take a fairly long time to empty because stores carry A LOT of food. Toilet paper, though? Not nearly as much. Few people have ever had to wipe their asses with anything else, and the thought of not being able to wipe creates just enough anxiety to trigger a trip to the store to load up what they can.


Once some people start buying huge quantities and the shelves start to empty, that triggers a secondary panic in people who don’t worry about the virus or quarantine, but DO worry about the store running out when their limited supply at home runs out. So THEY buy a bunch. This secondary group typically empties the shelves.


Being from a rural area where week-long power outages were the norm, I’ve pretty much always been prepared for that kind of eventuality. But I don’t stock up on toilet paper. It’s bulky, takes up a lot of room, and our cats love to use it as scratching posts. We typically buy enough for one week, then re-supply at the end of the week. Well, it’s the end of our “week.”


When I saw the empty shelves at Walmart, I was a bit shocked. I anticipated a run on TP at some point, but I expected it to be weeks down the road.


When I got to a computer, I checked a few online stores (like Amazon, etc.) Much to my surprise, MOST brands of toilet paper was backordered for at least four weeks. That’s never good. That means THEIR warehouses are likely out of toilet paper, which means the entire supply chain of toilet paper is nearly exhausted, which means ALL toilet paper available everywhere will soon disappear.


Given demand will only increase until the threat of quarantine abates, we’re looking at a very long toilet paper shortage. Any and all toilet paper that’s manufactured will be delivered to crowds of people anticipating the delivery. It’ll be just like the various toy crazes that have hit the holiday season over the last few decades. Remember Cabbage Patch Kids? It’ll be like that, except the crowds won’t just be desperate parents of nine year old girls. The crowds will be anyone and everyone… all likely experiencing a serious dingleberry problem. Can you imagine the stinky-ass riots that could erupt? It’ll be amusing.


If this toilet paper shortage continues, it’ll be interesting to see what other products disappear. Paper towel, flushable wipes, and Kleenex are inevitable. Probably napkins, too. What about bidet kits for toilets? How about that kinda-gross reusable toilet paper? Handkerchiefs? Maxi-pads? Rope? Cotton? All are fair game. And a lot more, which I detail in a section of my “thanks for the sales boost coronavirus” trail running book “Never Wipe Your Ass With a Squirrel.”

Still, we really like our toilet paper. It'll be pretty fascinating to see how much toilet paper is selling for per roll on the open market. The toilet paper trade could really take off in the coming weeks. In my psychology classes, we'll be tracking the prices every few days on some of the online auction sites.


Anyway, for all my readers who are reading this soon after posting, I’d recommend you run to the store and stock up, at least a little bit. It might be awhile before the toilet paper supplies can match the demand.
Posted by Jason at 3:05 PM