"Big Boys Don't Cry": How and Why We Screw Up Male Emotional Expression 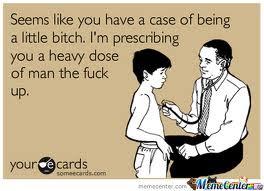 
It's a refrain all of us have heard, right? Growing up, I heard this from all kinds of people. The implicit message was clear - you need to harden up!


I've always questioned the logic of this idea. As a male, I have always experienced plenty of emotion. Why was  I being told to suppress it? That doesn't seem all that healthy.


Over time, it has become somewhat taboo to express that "Big boys don't cry" stoic mentality. In fact, we now encourage men to freely and openly express emotion. That's almost always the sentiment behind the idea of "redefining masculinity." Dudes, at some point in their lives, were punished for their expression of emotion. And that tends to leave scars. If we don't have an emotional outlet, that shit festers. Eventually it spills out in very, very unpleasant ways. It's safe to say stomping those emotions deeper and deeper within is a really bad idea.


So what's the problem?


The people promoting the idea of the free and open expression of emotion don't quite get one critically important detail: Sharing emotion makes us look weak. More specifically, it makes us look weak to people who need to perceive us as strong, capable protectors and providers.


If we're sharing emotion with our significant other, this lowers our perceived value in her eyes. That's especially true if we're sharing inadequacies and insecurities, even more if those issues revolve around her questioning our ability to provide for and protect her and our children.


This sharing is also problematic if it's done among males in a situation where we're figuratively (or literally) going to war. In that situation, the men on our "team" need to know we are capable of protecting their back. That's why us guys have such a strong tendency to tease and haze each other. It's a test designed to assess our resilience. Men who crack under the pressure of being teased probably don’t have the chops to handle dangerous potentially life or death situations.


Ever notice how the degree of male teasing and hazing increases as a function of “going to battle”, figuratively or literally? Think athletes hazing their new teammates. Better yet, police, fire fighters, or dudes in the military. Why do they do these behaviors that make little sense to outsiders? Simple. It’s a test. And not everyone passes the test.


Back in the day, men had a lot more options for male-only spaces. Women were not allowed. This provided a group of self-selected men to develop close relationships with other men in a safe place ("safe" meaning "not the battlefield (or athletic fields, mats, courts, ring… whatever) where we’re actually in danger.") Men could be free to share any and all emotions in this group with other men who can empathize with their experiences. The mutual self-disclosure creates a vicious cycle (the good kind) where the members of the group get more and more comfortable with sharing. It doesn't take long for an environment of great therapeutic value to develop where men actually have the freedom to share their vulnerability.


Because the other men of the group have tested them for their emotional resilience. Once you know someone HAS the ability to harden the fuck up when the shit hits the fan, the rest of the group can give them the freedom to express emotional vunerability when they need it. Seeing how this works in practice is a really cool thing.


Unfortunately, all-male spaces are quickly dying. Well-meaning women (and a lot of ignorant men) don't understand that critically-important function of male-only spaces. Instead, they see it as an institution of oppression because they assume the guys are merely plotting ways to help each other advance to the upper echelons of society ("good 'ole boy's club" idea.) Or other such nonsense. The old axiom of "Big boys don't cry" really should be more specific:


"Big boys don't cry around people that need them to appear strong."


In all-male spaces, men have the freedom to drop that wall of emotional strength. In the absence of those all-male spaces, men are given two really, really bad choices: Bottle emotions up with no release at all, or release those emotions on the people who rely on them to be strong, resilient providers and protectors. Men are forced to either go batshit crazy by suppressing emotions (could this be the reason so many otherwise docile men "snap" and go on mass shootings?) or become a weak, emotional turd in the eyes of their love interests. Nothing kills attraction faster than a man who appears likely to crumble under pressure.

But Why Do Women Say They Want a Man That's "In Touch With Their Feelings?"


It took me a long time to realize that's NOT what women want when they say they want a man in touch with his feelings. Women want a man who has the emotional resiliency to do two things, including:

So the “I want a man in touch with their feelings” simply means she doesn’t want a cyborg incapable of experiencing emotion. Interestingly, I've found women really don’t recognize the fairly subtle difference between “I want a man in touch with their feelings” and “I want a man who can understand feelings” until they see it in action. Since a man who is incapable of understanding emotion is almost always worse than a man who cannot control his emotions (because the emotionless suck at relationships and parenting), it’s probably safer to err on the side of “overly emotional.” It is, after all, possible to learn to control emotion, which isn’t the case with those who do not experience emotions. You know, psychopaths.


We’ve all known these kinds of men. You tease them. They take it personally, then either whine, pout, or fly into a rage. Regardless of the response, it sends a clear, direct message - this man can’t be trusted. In our ancestral hunter-gatherer days, the tribe’s older males would continue to tease and haze them until the lesson is learned. If they were incapable or refused to learn, they were expelled from the tribe. In our modern world where tribalism isn’t necessary for survival, these emotionally-weak men are simply ignored.


We lose sight of that today because our male-only spaces have been destroyed. This entire Man Camp project is designed around this very idea. We don't exclude women because we do dumbass stereotypical "man cave" stuff like fart, visit strip clubs, and make sexist jokes. We exclude women because we recognize men need a place to be able to act like men, which sometimes includes using the men of our tribe as an emotional outlet. All of us feel shame, guilt, insecurities, and doubt our abilities to handle our professional and personal responsibilities. But few of us have access to a place where we can express emotion without severe negative consequences.