Why Does Attractiveness Matter?

If you spend any time on social media, you probably encounter a lot of posts like this. It's a weird conflation of pro-body image and anti-fat shaming messages wrapped in overly flowery language (descriptor intentional.) While I enjoy dressing ideas in fancy wardrobes to make them more socially-palatable, it covers the important critical concepts that actually matter. In this case, the author seems to be saying "all women, regardless of body type, are universally, physically attractive."


We all have our particular kinks, so yes. There are SOME people who probably find any given individual attractive. Rail-thin fashion model? There are dudes who find that look irresistible. Morbidly-obese couch potato? Some dudes can't get enough! One-legged dude covered in a thick mane of curly body hair and smells like a lint trap? There are women that salivate at the thought of boning him.


Here's the deal, though. There is an "ideal" that will appeal to the widest section of the population. Not necessarily EVERY member of the population, but most. This is primarily a function of evolution and is controlled by neurotransmitters and hormones in our nervous and endocrine system, but sociocultural factors play at least some role in interpersonal attraction.


Getting closer to that "ideal" will make you more attractive to a wider segment of the population. In other words, it gives you more options. More importantly, it gives you better options where "better" is defined as "an option that is closer to the ideal of your preferred gender." When it comes to reaching that ideal, men and women have much different criteria, however.

How This Works for Female Attractiveness

Women really only have one important universal variable to consider: Fertility. While we don't usually think of fertility as being "attractive", the physical markers that indicate high fertility ARE attractive. Youth and health are the two primary components that indicate fertility, so all the female qualities guys find attractive center around those two constructs. Specifically, we (guys) look for a waist-to-hip ratio of about 0.7 (which is curiously independent of actual body size), full breasts, clear skin and shiny hair, facial symmetry, larger eyes, contrasting facial features, and, perhaps most importantly, youth.


Think about all of the things women use to improve their appearance. Push-up bras, Spanx, breast and butt enlargement surgery, and well-fit clothing all accentuate that magical 0.7 ratio. Acne products, exfoliating products, moisturizers, spot-correcting products, concealers, highlighters, blotting papers, hydrating sprays, and powders all give the illusion of clear complexion. Hair restoration products, clarifying shampoos, and most conditioners are designed to enhance hair shininess. Products like lipstick, lip liner, eye shadow, eye liner, mascara, etc. all create an effect that makes eyes appear bigger and/or increases facial feature contrast. And youth? That's the point of our obsession with "age eraser" tools like anti-wrinkle products (including the overuse of sunscreen), hair coloration, blush (which, like lipstick, also gives an illusion of sexual arousal), teeth whitening, primers, lash curlers, and, of course, plastic surgery.


So... the closer women get to the "female ideal", the more attractive they will appear to the largest number of people. In graph form, it looks like this: 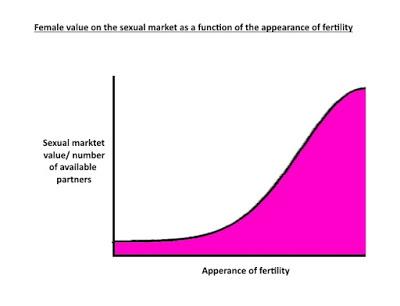 Unfortunately for women, their "value" is pretty much dictated by their age. Their value increases until about the age of 24 or so, then drops as they continue to age. That's not really a politically-correct thing to say, but it's just the way our species works. Don't believe me? Ask any woman at 55 if she can attract as much male attention as she could at 25.

How This Works for Male Attractiveness

For men, it gets a little more complex because, well, women's preferences are a little more complex. Again, remember we're talking about universals here. Individual preferences will skew this once we drop from the "all of humanity" level to "Joe, the dude who works at Wendy’s" level. Men essentially have four components that determine their value to women:
Why exactly is this so complex? Hypergamy. Women's sexual strategy requires her ideal mate to possess this combination of characteristics to provide good genes and give both her and her offspring the best chance at survival. Again, it's evolution in action, which produces behaviors that are controlled by the nervous and endocrine systems. When looking for a mate, the typical male is looking for a fertile woman. A woman, on the other hand, is looking for a cornucopia of qualities that are nicely summed up in one of my all-time favorite college dorm posters: 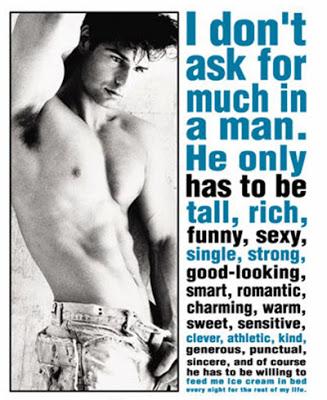 Just like women, men use this information to make ourselves as attractive to potential mates as possible. Our physical attractiveness isn't based on youth so much as it's based on good genes (because dudes can produce viable sperm pretty much until death.) The indicators of male physical attractiveness are based on healthy genes and current physical health. Things like facial symmetry, high cheekbones, a strong jaw line, and a pronounced chin are most important for genetic health. Fitness (like washboard abs) and an absence of obvious indicators of sickness (like a rash and pale skin) are the best indicators of current health.


Confidence is a weird characteristic, but relevant. Confidence can be displayed by possessing great social skills, dominance and power, and most importantly, confidence around women. That last one is the best indicator of relative value compared to the woman. A woman, per hypergamy, is always going to seek out the male with the highest status. Nothing screams "high high status" like confidence. Here's an example to illustrate the point:


Jane is a female with a rated attractiveness (a tool researchers use to measure a person's measurable attractiveness) value of 5 out of 10. She's always going to look for a male of higher status than herself. Specifically, she's going to search for the man with the highest status she can attract. She meets Bob. Bob is a 7 out of 10 when combining all four of these characteristics. Because Bob is of higher status than Jane, he's not especially nervous around her. He comes off as confident. Jane is really attracted to that because his confidence is an indicator that Bob is high value relative to her own value.


Now let's look at Matilda. Matilda is a Finnish bikini model. She's a 9 out of 10. SHE meets Bob. Bob is intimidated by her beauty because he believes she's out of his league. Matilda picks up on Bob's lack of confidence, thus indicating he's low status. As such, she doesn't find him attractive.

Weird, but that's how our species interprets male confidence as part of this "male status" formula.

Sidebar - Dudes, that's one of the secrets to succeeding with women. ;-)


Next is a man's ability to protect. Men are physically bigger than women, thus serving as natural protectors. Also, when pregnant and nursing, women are more vulnerable. As such, women place a value on a man's ability to protect. This is another reason women value fitness in general and displays of athleticism or "fighting skill" in particular. For what it’s worth, this is part of the reason our men’s group meets at an mma/ jiu jitsu gym. A noodly-armed man who is unwilling and unable to protect those he loves is essentially worthless.


Finally, we have a man's ability to provide. Like protecting, this is about survival. A man who can provide for his woman and their children is valued higher than a lazy, unemployed bum. Hear that, socialists? :-) It should be noted this doesn't always manifest as "making more money." If a man shows he has the potential to make money and the drive to make money, that's almost as good.


All of these things, in graph form, looks like this: 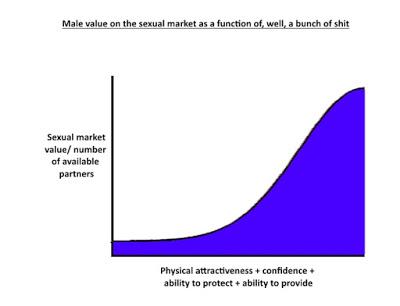 Guys, for better or worse, aren't affected by aging so much as what we accomplish in life. Women more or less get their value simply by being youthful, then have to fight that decline as they age. Guys, on the other hand, don't start with much other than their indicators of genetic health (assuming they're not trust fund babies.) Everything else? Guys have to earn it. That's both good and bad. It means we have incredible control over our own status, but it also means hard work is heavily rewarded and laziness is ruthlessly punished.


Sidebar - this is the precise reason why "just be yourself" advice, when given to men, is ludicrous. If a man isn't actively improving all of these realms (thus working to increase his value), his value is dropping. You've been warned, lazy asses!

So... How Do We Use This Information?

I know what some of my readers are thinking - "Wow Jason, that's a pretty harsh take on humanity!" Maybe, but it's reality. And sometimes the truth kinda hurts. We can either choose to ignore it, leave our head in the clouds, and become victims to our ignorance, or we can accept it and use it to make our lives better. I want to know how shit works, then I want to hack it to figure out how to make my life better, and by extension - the lives of my family. Understanding this helps.