Modern Marriages: How and Why So Many Kinda Suck

A few months back, a Facebook friend posted this cartoon: 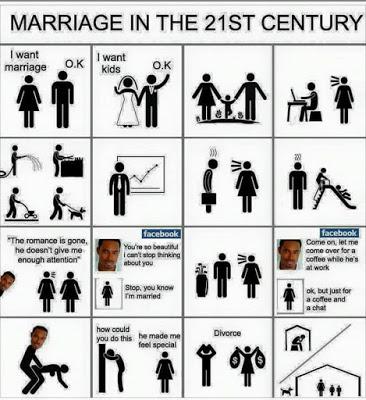 While a bunch of us got a good chuckle, it perfectly illustrates the trap that befalls many men and women in our modern world. In fact, most of the men who have shown interest in the Man Camp project have recognized this narrative occurs all the time and do not want to fall into this trap.


As an armchair experimental social psychologist, I'm interested in the hows and whys of this cartoon. Specifically, what dynamics make it true. More importantly, what can be done to change this situation. THAT is one of the things I do in the Man Camp project. After all, no man wants to live the life depicted in that cartoon.


So... let's break this down frame-by-frame. Before we start, it's important to note this narrative doesn't define ALL relationships, just many modern relationships. This specific scenario usually involves a woman in her mid-twenties to early thirties who’s educated and spent a few years casually dating and doing a little partying, and a man who isn’t especially effective at being a man with a strong desire to make his wife and kids the focus of his life, and has been searching for his one special soul mate after years of being mostly friendzoned by his various crushes. Here's an easier-to-follow numbered version:

Frame 1: After years of casually dating hot guys that were not long-term relationship material (i.e. - unwilling to commit OR were unwilling to be monogamous), the woman "matures" and starts looking for a nice guy that will treat her right. We call this "The Wall"; it's the point where a woman's sexual market value starts to decrease and her sexual strategy shifts from seeking exciting masculine males to safe provider males (a concept we call “hypergamy”.) She finds that in this dude she decides to marry. He's ecstatic because this is the first good woman he's found who loves him for him and really appreciates his willingness to treat her like a princess. Sure, she partied in her past, but he's willing to forgive because, well, he believes she's special and they were meant to be together. And she's giving him advertising sex (see my Women, Explained” post,) which is probably the best and most frequent he's ever had.


Frame 2: Both men and women have a primal drive to reproduce; it's how our species survives. Women control reproduction in our species (by choosing who gets to father their children.) There's a lot more to this dynamic, but we'll save that conversation for another day. For our purposes here, let's just assume the new bride has her new husband's children. Yay!


Frame 3: This represents the honeymoon phase of a relationship. Everyone is happy, fulfilled, and content. If we could bottle this feeling and sell it, we'd be billionaires. In modern American society, we generally expect this phase to last forever. For the ineffective male, this stage is incredibly affirming. This is the exact scenario he's dreamed about his entire life. All his hard work at being a nice guy is finally paying dividends. Instead of the intermittent sex he's gotten in previous relationships, he's now getting regular, pretty good sex, he has an emotional connection to a fantastic woman, and he has a growing family. This is his Utopia. For the woman, this phase is great, too. Riding the high of the honeymoon, she's still sexually attracted to her husband. The sex isn't quite as passionate as she had with her past more masculine men, but she convinces herself this is what "mature" relationships are supposed to feel like.


Frame 4: This effectively marks the end of the honeymoon. The ineffective male (probably enjoying a little World of Warcraft) starts getting nagged by his soul mate. Given that he's not educated in female behavior, he doesn't recognize the nagging is just a fitness test. As such, he fails miserably, thus lowering his perceived value in the eyes of his wife. Had he handled it properly (and continued to handle it properly), this would be the end of the story and they'd live happily ever after.


Instead of standing up to her, he acquiesces. He does so because he has a genuine fear that if he does stand up to her, she will stop giving him affection and sex, which he believes is an affirmation of her love. His unwillingness to rock the pussy boat will cost him dearly by, ironically, causing the exact thing he fears most - a withdrawal of her love (and sex. Never forget the sex. The ineffective male puts up a front of being nonsexual, but it's a facade.)


Frame 5 and 6: Being the good provider he is, the ineffective husband busts his ass at work and around the house. His wife's friends are envious of her "getting lucky" to find such a nice, hard-working guy. She may mention those “compliments” to him, which just reinforces his willingness to do anything and everything for her. The dirty little secret ineffective males don't like to admit, even to themselves - he's busting his ass in the hopes she'll appreciate all his sacrifices and reward him with more/better sex. Instead, he gets maintenance sex - infrequent, unenthusiastic, inhibited sex. The sexual arousal she felt in the honeymoon period is dying fast, and she can barely contain her revulsion of his touch. She begins using the kids and work as an excuse ("I'm too tired") to avoid sex, which motivates him to do even more for her. Instead of realizing HE'S the reason for this, he begins to think maybe there's something physically wrong with her. This is how women get screwed (not literally, obviously) in this narrative.


Frame 7 and 8: The fitness tests continue. The failing of the fitness tests continue. His value to her continues to plummet, which effectively kills any arousal she may have felt. This is a critical point that's often lost in these discussions, and it's an important lesson in hypergamy. The ineffective male is a provider, and a damn good one at that. He genuinely believes THAT is the attention his wife wants (and needs.) Like someone frantically kicking and flailing their arms in quicksand, he just makes the problem worse and worse. He doesn't realize she also has another side that desires a masculine man who will be able to pass her fitness tests that he fails... All. The. Time. She used to get that kind of attention from masculine men all the time before she met him. She really believed that was just a phase; she didn't realize that desire for a male who sexually arouses her (masculine men) would never go away. That leads us to frame #9...


Frame #9: At some point, she begins to seriously question the relationship and probably her health and begins confiding in friends. Female sexual arousal disorder is one of the most frequent complaints of women in long-term relationships. Per our society's tendency to want to fix everything with drugs, this situation has led to the pharmaceutical industry's race to discover the "female Viagra." Nobody really stops to consider that the women, even though they feel emotionally-bonded to their husbands, simply aren't aroused because, well, their men act more like women than men.


Frame #10, 11, 12, and 13: The woman craves a masculine man, whether she consciously acknowledges it or not. Either way, this is where pickup artists who focus on married women ply their trade. A masculine dude who gives her the attention she craves steps in and does what he does best. She goes along because she experiences feelings (namely intense sexual arousal) that she hasn't felt in a very, very long time, and it reinvigorates her. Makes her feel young again. Make her feel things her husband never made her feel.


There are two interesting and divergent narratives that typically arise from this after frame #13. In some cases, the woman is now satisfied and goes back to her hum-drum life. She may occasionally dip her toes in the masculine man “pool” when the mood hits, but she's not willing to jeopardize her relationship with the man she loves. This, of course, is the reason why ineffective men have such a vile resentment for "damaged" women... they just don't get that women need more than a loyal provider. The other path women take brings us to frame #14...


Frame #14: Sometimes, after a woman gets a taste of the delicious masculine fruit, they get a "grass is greener" mentality and decide to end their current relationship... usually to be with the man who seduced them. That leads to divorce, lots of heartache, and a broken family for the kids. The husband is destroyed because he genuinely does not understand what went wrong. Worse, he now has to pay alimony and child support, so his financial future is likely ruined. Hello, sleazy apartment!


On the surface, it seems like the woman really won, but she's a well-past her peak value on the sexual market AND has kids. Her seducer would have left her (because he can attract much higher value women), so she's left with dating. She was appealing to him because she was unlikely to want any sort of commitment (she was an easy piece of ass.) She's left to pick through the remnants of low-value available men, which are basically seriously-flawed masculine men (think criminals, those with serious mental disorders, con artists, etc.) OR just more ineffective males. In the latter case, she may get remarried and the cycle plays out again.

Yes. Yes it is. But, unfortunately, it's the reality for all too many people. Go to the /r/DeadBedrooms subreddit and read through some of those stories. You can see this exact dynamic playing out again and again and again. The reason I talk about this isn't to play a "men are hapless victims" card or "we need to abandon monogamous relationships."


Rather, I talk about this because it's entirely fixable.


However, it's the MALE that has to do the fixing. This entire narrative can be avoided if only the beta male would, well, man up. That's basically what the Man Camp projects aims to do... give men a road map and mutual support to learn to get better at being a man.
Posted by Jason at 5:01 AM